A Message in a Bottle

Writing is and always has been my first art form. Some of my earliest memories were of me typing away on the computer nonsensical orderings of letters on a Microsoft Word Document, hitting print and then running to my mother with the freshly printed page telling her it was a message that I had received from some made up person I had created in my head.

Needless to say, I was something of a story teller.

I loved telling stories. And while it took me a while to really delve into ‘reading for fun’, eventually I got there. I read books about Titanic and Apollo 13. I read mystery novels like Nancy Drew, and classics from Mark Twain and William Shakespeare. From there, I discovered other forms of media with story telling aspects, such as video games and movies. I don’t know if I really started to connect the importance of stories in my life though until I hit the dreaded Middle School Age.

Middle School probably contained some of the worst years of my life (similar to most people I’m sure). Though for me, it was compounded by personal family issues occurring at the time as well. In an attempt to disassociate myself from the chaos around me, I began to dive into books, tv shows, and more specifically: Comic Books.

My fascination with Comics grew out of a love for the original Teen Titans cartoon show that ran on Cartoon Network from 2003-2006. I remember flipping channels and catching the end of the episode “Masks” and thinking ‘Wow, that wasn’t necessarily a happy ending’. As I continued to watch, I began to love the more serious elements, such as the highs and lows in life, the struggle to get through things and the ultimate joy that came from recognizing what was most important to you. Wanting to see where the Titans’ fearless leader got his stuff from, I went to see “Batman Begins” and from there on, there was no stopping it.

I read everything from Batman to Spider-man, from the 60’s to the 90’s to the present day. I was fascinated by the various Marvel and DC Universes and the notion that various plots could all occur in different ‘universes’ so to speak. Eventually, this led me to find Fanfiction.Net, where I started to read stories based off of my beloved comics. It was then that it occurred to me that writing was truly an art. I had been spoiled thus far with great writing, plot drafting, and character development, but yet, to really have that talent, one had to work at it. It was there that I started to try my hand out with the pen again.

Under the name “RenaRedhead”, I wrote numerous fanfictions. But that was just the start. I began to branch out, writing in my spare time whenever a story would hit me, something new. Sometimes it was an original story. Sometimes it was an article-like piece. Most of these, I never published. But they were good practice pieces and kept my love of writing alive, especially when the onset of my cosplay exploits started to demand my attention as well.

While costuming and school occupied my time quote often, I found myself soaking in any information regarding writing, its forms, presentations, and uses. As a film student, I gained a strong appreciation and understanding for ‘showing’ vs ‘telling’. Not to mention how actions can speak volumes in a story. I learned about pacing, story structure, article composition, and various new ways in which I could use writing to express myself. Thanks to these encounters and my continuous love of writing, today, I enjoy blogging especially. I particularly enjoy writing on travel, art creation, and pop culture.

Most importantly though, as I’ve traveled down my own writer’s journey, I’ve realized what a gift writing can be. It truly is the starting point to expression, a way to connect with those around us. So hopefully, on here, we can practice our writing together. And maybe help one another on our ways as writers. I know I still have a ways to go. But I hope you will join me on the ride and I look forward to reading your own works as well!

How long have you been writing for? What kind of writing have you done?

The same way I became interested in writing fiction, I was curious! Additionally, I’m generally terrible at journaling. I try, but I rarely get to physically write out what happens to me every day. So when I can write about my daily life, opinions, and thoughts via a blog, I feel I can provide a ‘journal’ of sorts to any future generations.

What kinds of literature intrigue you the most?

An unfair question; there are so many! In particular, I think Comic Book and Scriptwriting (for theatre and film) are very intriguing as they often allow for a certain amount of open ended conclusions. Additionally, I appreciate how authors in these mediums must attempt to essentially cram in a lot in a short amount of words. That is a talent in and of itself.

Thematically, I tend to enjoy mysteries, drama, action and adventure. Stories that delve into the big picture questions such as ‘Why am I doing this?’, ‘What do I believe in?’, ‘What is most important in my life?’, and ‘What does it mean to ‘be a family’?’ always seem to grab my attention as well. Particularly, I find it interesting when the subjects of love, sacrifice, duty, honor, and loyalty are tested. In essence, I believe stories are a way for us to vicariously live through other characters. They’re a way to see if we could overcome the struggles they face. So what better stories are there then, then stories in which challenges are overcome?

Who are some of your writing role models?

I have a lot! The writer Marv Wolfman, who wrote “The New Teen Titans” comic series of the 1980’s, became a huge influence to me as a writer. Particularly with how he designed and created his characters so that they would naturally act as opposites or middle grounds for the others. I loved that idea because it allowed for him and George Perez (the artist of the series) to let the characters determine where the story would go essentially. I thought that was spectacular. Writer Lois Lowry had a huge impact on me growing as a writer. Her more dramatic themes pushed me to delve into ideas and scenarios related to how far one is willing to go for morality. Not to mention how overcoming obstacles can yield the greatest rewards.

In terms of writing style, I think I owe a lot to writer J.K. Rowling of the Harry Potter series. I always appreciated her pace and ability to weave in details so seamlessly into her stories. Additionally, I greatly admired her ability to let the situation and how characters reacted in said situations to teach readers things about the characters at times, while simultaneously making it so that we as readers felt that we could connect with her characters.

Finally, I think the classic authors were very inspirational to me as well. Shakespeare in particular will forever be one of my favorite authors. I very much enjoyed his ability to write dialogue that could be interpreted on stage and in film in thousands of different ways. Additionally, the themes of betrayal, comedy, tragedy, heartbreak, paranoia and foolishness in his works were all very intriguing to me.

You write a lot of fan fiction… do you ever work on original stories?

While I would argue that any story not yet told is ‘an original story’, as a writer, I understand the question completely. I do work on original stories, but these I save for actual physical publication. Fanfiction for me is a creative outlet, but not one I intend to make any profit off of. Original stories of my own design however, hold that potential, so I do not publish these online. 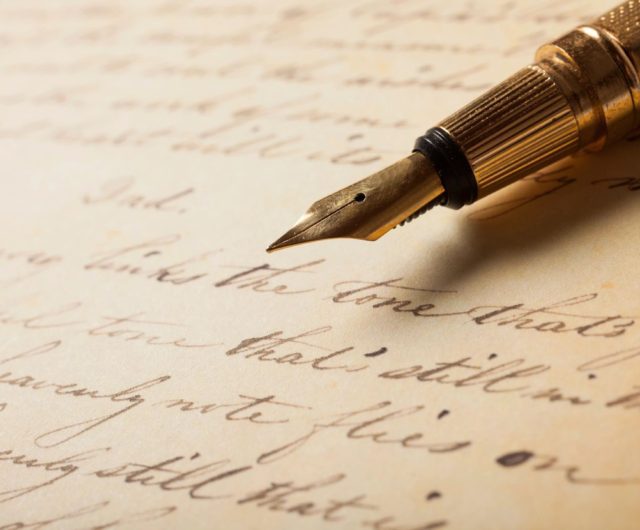 Words Can Not Describe